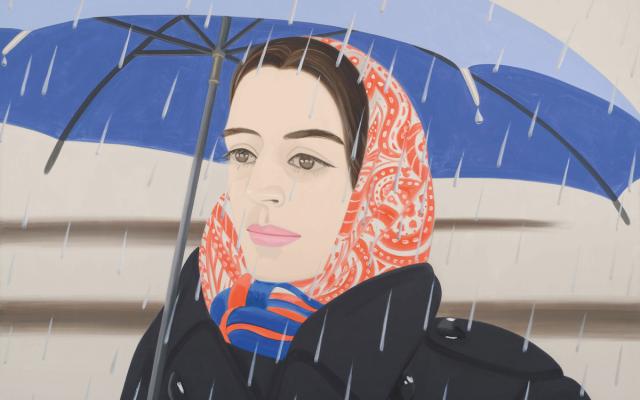 An analogous rap about Katz — that his work evokes too much of White’s privilege, especially WASP — might offer an explanation. Katz is Jewish, which, as his friend the African-American artist Arthur Jafa asserts in the catalog of the exhibition, places him in a line of “Jewish artists rendering whiteness”. Speaking as a filmmaker, Jafa makes specific reference to the Jewish pioneers of Hollywood – Carl Laemmle, Adolph Zukor and Samuel Goldwyn – who offered a cohesive and very kind outlook on life in their films.

The point of Jafa testifies to a broader impulse throughout Judaism’s history of assimilation and fusion with surrounding communities at the expense of the visible signifiers (yarmulkes, sidelocks) of faith. Yet assimilation is hardly a shield against anti-Semitism, whether in Germany in the 1930s, or even now.

However, it would be an overstatement to say that Katz’s work addresses these issues, although a 1962-63 self-portrait of the artist peering out from under a black trilby is suggestively titled Who passed. Ultimately, it’s more accurate to say that as an artist, Katz is an outsider wearing the mask of an insider whose work takes an ambitious shortcut to a promised land where the sharp edges of integration are polished by elegance.