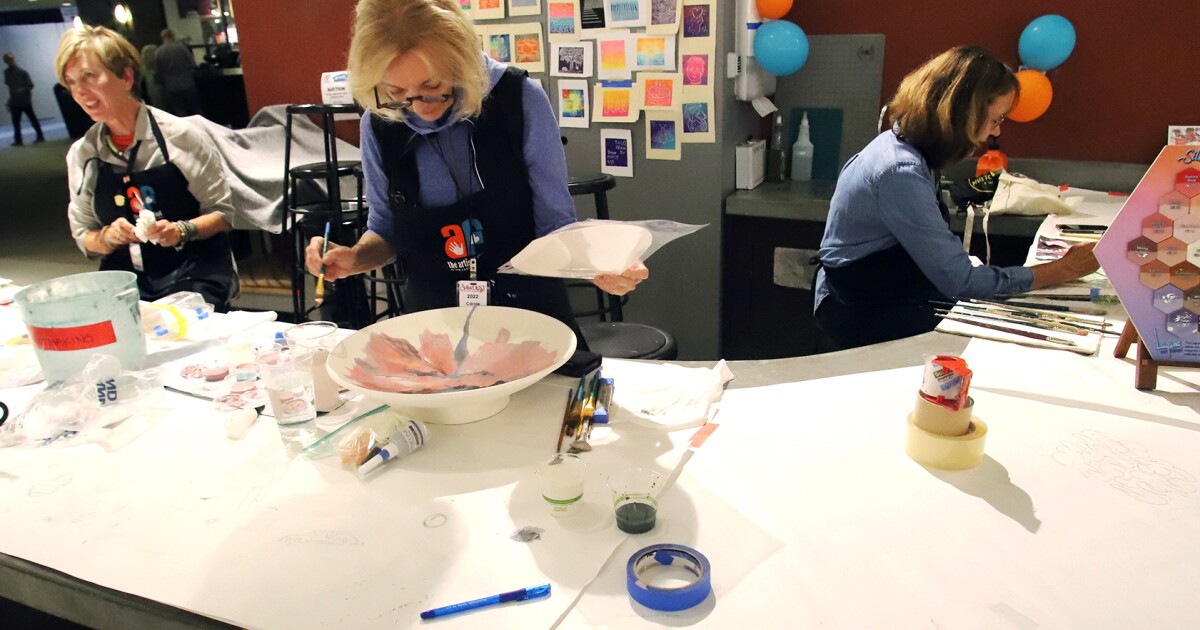 On a cool summer evening at the Festival of the Arts, several of the exhibitors gathered together, doing exactly what gave artists a special place in the heart of Laguna Beach decades ago.

They expressed themselves through their creations and through their unity of purpose, as 16 artists took part in an evening of painting on set last Saturday evening.

Artists stepped out of their comfort zone, many working outside of their typical mediums, to create platters and tiles that, once fired and glazed, will be auctioned off.

Long-time festival exhibitor Mike Tauber, ceramic artist and event organizer, is proud to see his fellow exhibitors try their hand at something new.

“I was very proud of the artists who tried it,” Tauber said. “I think it was a bit bold of them to do this, especially in public, and knowing that many, many people are going to be looking at their work – after they’ve been fired – at the auction. I thought it was really brave of them to try.

The auction will take place on the festival grounds on August 28 from 6-8 p.m., with proceeds going to the Enrichment Grant Program known as the Arts Festival Artist Fund. The Enrichment Scholarship aims to help artists looking to expand their careers. The nonprofit also issues hardship grants.

Opening bids for trays will be set at $100. The auction falls on the last Sunday of the Arts Festival, which runs until September 2.

A partnership with Laguna Clay Co. helped make the paint-on-set events possible. Since the start of the annual celebrations, the trays have been donated by the ceramics company, based in the Los Angeles County industry town.

Bryan Vansell, owner and president of Laguna Clay Co., said ceramics introduce many unknowns, and he answered questions from artists eager to learn more about how the process works.

“It’s pretty fun,” said Vansell, whose wife, Joy, teaches at the festival’s printmaking workshop. “When we take over the plays, it’s a bit like Christmas. Everyone is so excited to see their work and see how the shooting went.

“Then, of course, the auction comes, and everyone is very proud to be able to raise money for the Artists’ Fund. So it’s been a really fun event, and the festival itself, they’re doing a really good job.

Walking around the festival grounds, attendees learn about various crafts, from ceramics to jewelry, printmaking to watercolors, as well as a variety of subjects, from the human condition to natural beauty from around the world.

“All artists, they’re all there for very different reasons,” Tauber said of the Fine Art Show. “I think the common denominator is that they are extremely dedicated to creating works of art. The first thing every artist would like to see at the festival is a lot of people coming to visit them at their booths.

“They love to talk about their work. There are so many stories behind each individual artist – how they came to their work and what their work meant.

Attendance at the event has steadily grown. First-time attendee Lyn Hiner sought to differentiate her design from others, especially when everyone was dabbling in the same medium. His set featured a Le Mans racing car.

Others depicted wild animals such as butterflies, cartoon caricatures, and even a bowl of spaghetti and meatballs.

Hiner doesn’t typically paint with brushes, preferring to work with palette knives, but she has branched out to support a good cause by helping other artists.

“It supports me, and I love it,” Hiner said. “I like the community. I like the feeling of community. I enjoy and appreciate that, so something that only takes me a few hours seems like a no-brainer.

Mary Aslin, a pastel artist who has exhibited at the Fine Art Show for a dozen years, said she finds it ‘invigorating’ to work alongside her fellow artists, as opposed to the isolation of working in a studio . She produced a floral tile at the event.

The Laguna Beach City Council honored the Festival of the Arts with a proclamation acknowledging its 90th anniversary at the start of Tuesday’s meeting. Aslin shared his thoughts on attending the festival.

“It’s incredibly significant from a story perspective,” Aslin said. “There’s not a single day that I think I’ve been on the festival grounds without being aware of the historical legacy and what artists from 90 years ago said, ‘We love this area of world, and we love light and beauty, and we would like to share that with the public.’ …

“We lean on the shoulders of these wonderful artists who paved the way for us here. Here we are 90 years later, a few blocks from where they were painting, right by the ocean.

Support our coverage by becoming a digital subscriber.