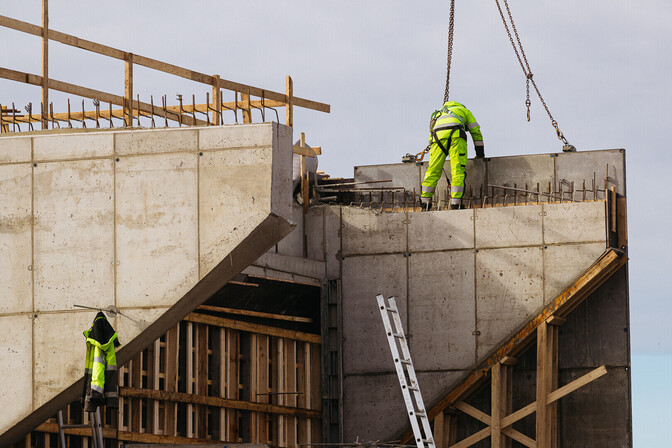 Several building material manufacturers temporarily closed their factories for long periods of time last year, with the onset of the pandemic, resulting in projects being suspended by developers.

At the same time, construction as a whole remained more dynamic than initially expected but, given the issues facing suppliers, this was not all good news as strong demand coupled with supply falling has led to a surge in prices in some regions, especially metals and also wood.

A member of the board of directors of the construction company Nordeecon Priit Luman told ERR that: “We are the most affected by steel [prices], although all commodity prices, various metals and insulation materials have increased, and wood has increased. The picture is the same with regard to the offer. There are definite problems with steel. “

Enno Rebane, head of the Estonian Building Materials Producers Association (EETL), told the ERR that major building materials producers have been shut down due to both the pandemic and the downturn that followed, and may not reopen for months.

On the other hand, long lead times for construction projects do not mean that shortages have to have a far-reaching effect.

He said: “Generally the growth in demand has been high and caused deficits in some places. There are other reasons for this. Construction is a long and planned process, so when a long term plan is needed, everything will work out well. “

The crash was not as deep as initially expected, he added.

As reported by ERR News, the Construction Price Index, which measures changes in construction spending based on the prices of labor, building materials and construction equipment, has increased by 6.2% year on year until the second quarter of 2021 to reach a record level.

Priit Luman says the supply difficulties of the past six months have clearly affected construction times, but the work has not stopped nonetheless.

“Nothing has been completely postponed, but there are issues with the availability of some materials,” said Luman.

Enno Rebane said the supply of metals, chemicals used in construction and also some plastics has failed to meet demand lately.

He said. “It also means that the local materials we make here. From sand and gravel, crushed stone, cement and lime, dry mixes and concrete mixes, for example, should be in a better situation. They should be of less concern. “

Strong demand for timber, another locally available product, has also had an effect on prices, he said, with prices for certain types of timber rising dramatically.

“We are currently putting a number of construction sites on hiatus for this very reason, and that will certainly not help the recovery,” he said, adding that there was no quick fix and easy to problem.

Dividing the construction cycle between the private and public sectors would be an option regarding local demand – the high demand extends far beyond the Estonian coast – said Rebane.

“If we get more orders or the economy starts to do well, the private sector may be able to build more, and the public sector can raise funds for times when the private sector is doing worse, and build at that time, ”he said. mentionned.

“Other than that, unfortunately, we’re doubling down right now. Both the private and public sectors say they want to build a lot, and with diligence and speed, for various political reasons, despite, or even because, demand levels are high and there are urgent supply issues, ”Rebane said.

Jaanus Aun, board member of the Estonian Private Forestry Center (Erametsakeskus), told ERR that when it comes to timber, the price of high-quality coniferous timber has skyrocketed recently, which , he noted, will have a knock-on effect on construction prices.

Aun said he remained cautious about the future, however, and could not make any longer term predictions; he is joined by other industry representatives, including Priit Luman, who wouldn’t dare say when the price and supply of building materials will stabilize – the progress of the coronavirus vaccination program around the world was a glimmer hope, they said.