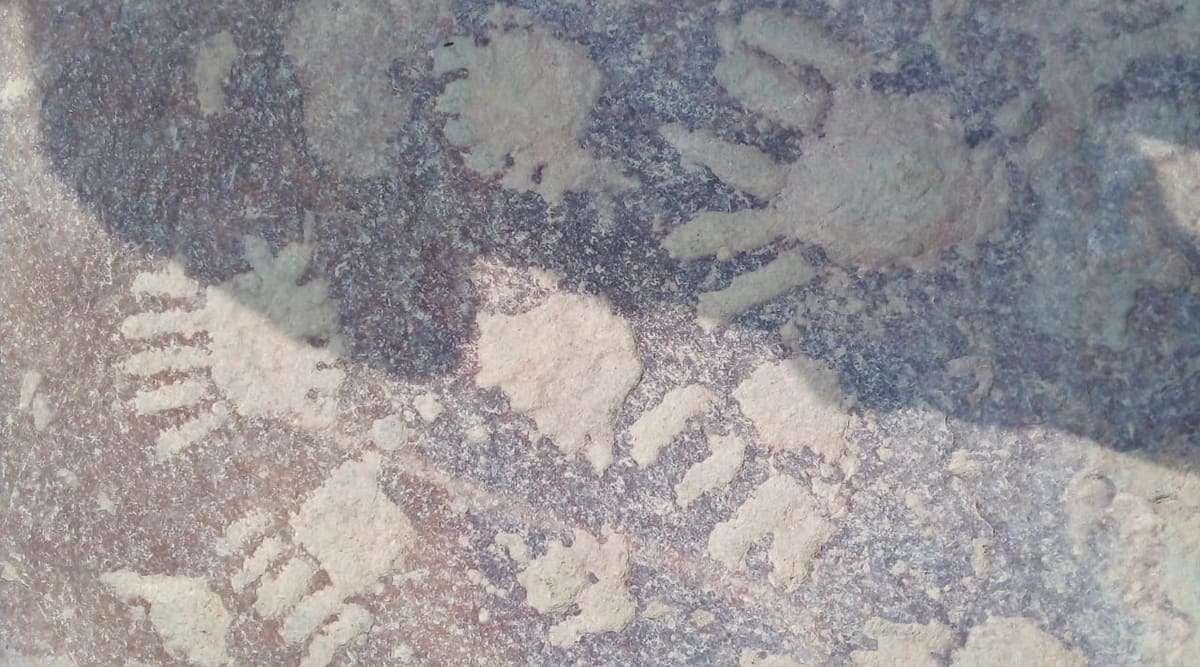 Discovered in Faridabad: prehistoric cave paintings that may be nearly a lakh years old

Haryana archaeologists have estimated that a prehistoric site, the Mangar Bani hill forest of Faridabad, from which cave paintings were recently discovered, may be as old as a lakh of years old.

“Based on the topology of the tools, we can say that the date of prehistoric inhabitation on the site can be around 1,000,000 to around 15,000 years ago. But we have also found evidence of later dwellings, even up to the 8th-9th century AD, ”said Banani Bhattacharyya, deputy director of the Haryana Archeology and Museums Department.

“It can be said that this is perhaps one of the largest Palaeolithic sites in the Indian subcontinent, where Stone Age tools have been recovered from various open-air sites as well as from rock shelters. “

It was in May this year that environmental activist Sunil Harsana spotted a prehistoric cave painting in the forest of Mangar Bani hill. This prompted the Haryana Archeology Department to conduct explorations in the areas of Shilakhari, Mangar, Kot and Dhauj in Faridabad, and Roj ka Gujjar and Damdama in Gurgaon in June of this year.

Talk to Indian express, Harsana said that the paintings and the caves they are made in have been a part of his life for many years, but it never struck him that they can be so ancient.

“There are a lot of old caves that have survived here, we were aware of the paintings they contained before, but we never realized they could be so important,” he said.

Harsana has recently documented various aspects of the Aravalli, from wildlife to vegetation, and decided to do the same with art in the caves. During the lockdown, he took photos of the designs which he then uploaded to social media. It was these images, he said, that caught the attention of archaeologists.

“The caves are in a hard to reach area so we have to plan before we go. It is on a high cliff and the terrain is very difficult, this is the maximum difficulty level in terms of climbing. This is probably why the caves and the art also survived, because people don’t normally go there, ”Harsana said.

“Some caves have rock art while others have paintings, but only a few of the paintings are in good condition, the rest have deteriorated. The art includes what appear to be symbols, marks, some are very old drawings, but what exactly they are, only the archeology department can tell, ”he said.

Officials said it was the first time that a prehistoric site with rock paintings and rock art of great magnitude has been found in Haryana, although tools from the Paleolithic age have been found. been identified earlier in parts of the Aravalli. The latest discovery, officials said, will take the history of Haryana further back in time.

“The cave paintings are not yet dated, but at least some of them are in all likelihood from the Upper Paleolithic period,” an official said.

Sources said the area is not a protected site and has not been properly documented or explored so far. However, the Principal Secretary of Haryana, Ashok Khemka, said: “We will grant state protection to the forests of Mangar Bani under the Act of 1964 on Ancient and Historical Monuments and Archaeological Sites and Remains, due to the presence of a large number of Stone Age sites with cave paintings and tools from the Paleolithic Age found there.

“This site is very promising because these cave paintings can even be compared to the world famous cave paintings of Bhimbetka. In the near future, we will be testing trenches, documenting and mapping all rock shelters and open pit sites. Radiocarbon dating and accelerator mass spectrometry techniques will be used to date the rock paintings. With the cooperation of other departments, the forests of Mangar Bani will be fully developed as a prehistoric eco-forest. It also highlights the need to keep these pockets in areas of the NCR out of the reach of land sharks and reckless development, ”Khemka said.

“Part of Something So Bigger” – CBS Denver