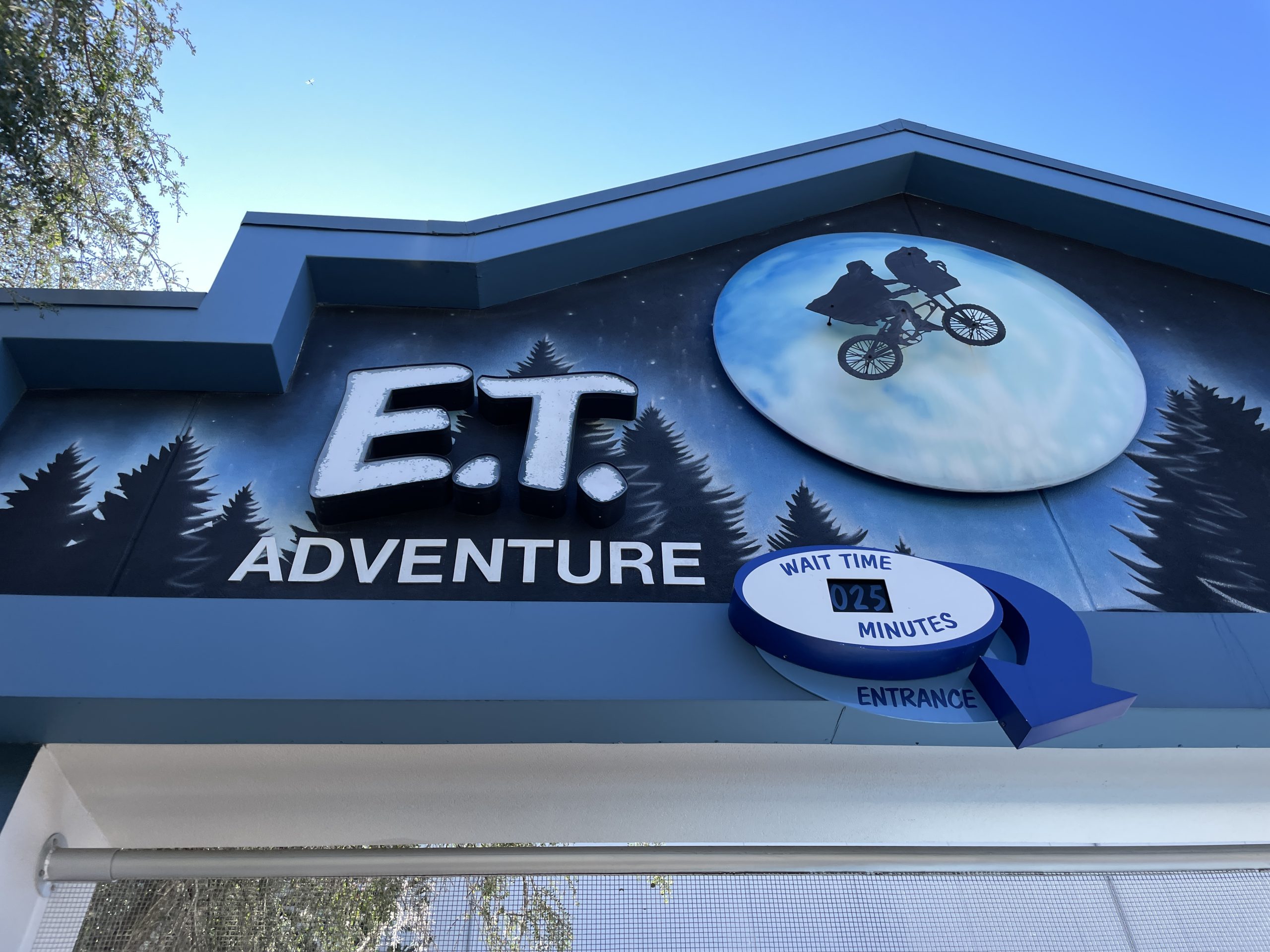 The biggest news to come out of the ET Adventure rolling at Universal Studios Florida IN YEARS just happened, as they finally restored the smell of pine, and more!

Additionally, work continues on replacements for Shrek 4-D and Monsters Cafe, as well as new escape rooms for CityWalk. Let’s check it all out, and more, in today’s photo update!

Before getting to ET, I wanted to stop at the Hello Kitty store near the front of the park. Some people have noticed a bit of construction in this store recently, so I wanted to see what it was.

Looks like one of the dividing walls, which separates the main Hello Kitty section of the store from another part of the store, has been squared off. This pink wall was originally in the shape of Hello Kitty’s head with a bow shape. Now that’s just a square opening.

What the wall looks like now after recent work

The change is likely due to the section on the other side of that particular wall no longer offering Hello Kitty merchandise. Instead, it’s for Funko and Loungefly products. This part of the store hasn’t offered Hello Kitty products in over a year, so this change may just be to better separate the sections.

Entrance to the Funko/Loungefly area of ​​the store

Opposite side of wall now square

The floor of the Loungefly area still features the Hello Kitty arches, so maybe they will be removed from that side of the store next?

The rest of the Hello Kitty store remains fully Sanrio character themed, including the iconic rainbow wall in the main area.

Moving on, the Brown Derby Hat Shop is behind work walls next door. It is receiving a much needed renovation. I don’t believe this store has reopened since the Covid related park closures in 2020.

No sign of anything happening at the old Prop Shop and MyUniversal Photos locations, despite mysterious construction going on inside those two vacant stores. Rumor has it they will be combined into one larger package, but no one seems to know for sure what it will be used for.

Today’s biggest news is that perfumes seem to be back at ET Adventure!

After what feels like YEARS, we finally have the smell of fresh pine in the forest, as well as the burning smell upon arriving at the Green Planet stage during the ride.

As we had already reported a few years ago, the building was so saturated with the smell of pine that many hadn’t even noticed that it was no longer pumping! Now, the team members say that many scent effects have been fixed and reactivated, not only in the queue, but also on the ride!

Some notice the change and wondered if the scent in the queue has been replaced with a newer version, but it’s possible we’ve all gotten used to the predominant scent being the water feature in the queue. waiting in recent years, as the residual pine scent that had once saturated the building has faded.

To me, the scent of fresh pine feels like it was over ten years ago. I don’t know if the forest pine they use now is the same as before, but looks just as subtle and realistic as I remember. You can not only smell the forest in the queue, but also during the first half of the ride!

The other scent that has been reignited occurs when we first arrive on the dying green planet. It’s a burning scent, to accentuate the sad state of the planet without the healing touch of ET. It’s not a “new” scent either, just one that’s finally being brought back!

For anyone who doesn’t remember the original fresh pine smell of this attraction and has instead become accustomed to the smell of the water feature that pervades the building, it may take a while to settle in. get used to! I would suggest checking out the Poseidon’s Fury queue at Islands of Adventure though, as it still smells exactly like the ET queue has smelled for about a decade! (They probably treat the water with the same chemicals there as well.)

Moving on to the ongoing construction projects we’re following at Universal Studios Florida, some fixes seem to be present in the old Shrek 4-D building.

We are waiting for a new Minions Villain-Con Attraction to take over that space, though Universal has yet to officially announce the project.

Work continues on the new, more robust entrance area to the new attraction.

At first glance, I thought “Villain-Con” might be written on one of the new pieces of steel, but it turns out it’s just “Met-Con,” which is a company of local construction.

This new Minions-themed attraction will be based on the Minions spin-off movies, not the original Despicable Me series, which already has an attraction across the street from here.

You can read more about this possible new attraction, which should be interactive in some way, in our recent history!

I wonder if the flashing red lights of the old “Hot Set” days of the Hitchcock Show will remain, or will eventually be removed with this new, remade attraction?

It’s possible that a new Minions Villain-Con themed Gift Shop will be built directly across from the Super Silly Stuff Minions Gift Shop we currently have.

Next to the old Shrek 4-D building, work continues on the old Monsters Cafe building. This area is ALSO covered in Minion-themed work walls, yet Universal hasn’t announced its replacement either.

It looks like much of the interior of this structure has been gutted and the exterior is getting a makeover.

A recent permit for this project, known as Project 210 in the documents, is for “roof replacement” and lists P&A Roofing and Sheet Metal as the contractor.

Revenge of the Mummy is STILL in technical rehearsals, also known as the “soft opening”, after first reopening to regular guests end of August.

During tech rehearsals, some effects may not work, express passes may not be used, and the attraction may close at any time while it continues to fix bugs. Hopefully the ride can be officially opened soon, after running more reliably.

And finally, new banners have been added to the entrance of the upcoming Universal CityWalk escape rooms since our latest update.

The banners show the two themed rooms of “Universal’s Great Movie Escape”, based on Back to the Future and Jurassic World.

Universal did not reveal an opening date, but they said ticket information should be coming soon. Its opening is planned before the end of the year.

“Coming Soon” has also been added to doors since our last update, so let’s hope that means VERY soon!

That’s all for now, but be sure to check it out our recent history for more details on the rumored Minions Villain-Con attraction. And stay tuned for news and updates!

Subscribe to the news or enter your email address below to never miss an update. Original photos: Alicia Stella

Consider supporting us on Patreon for as low as $1/month. All customers receive behind-the-scenes posts and exclusive podcasts. Learn more

Do you like tequila shots but have eczema? Hold the lime! – NBC Los Angeles