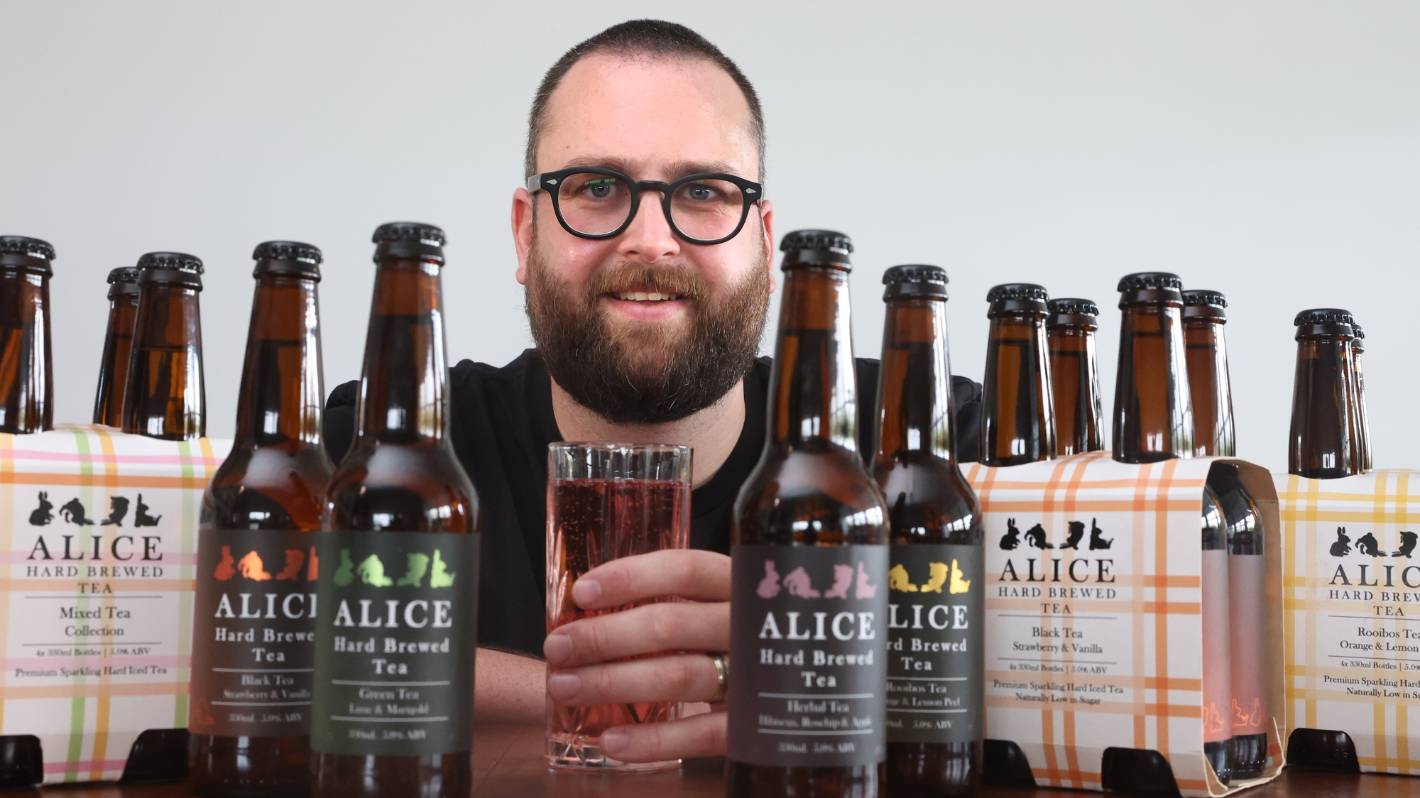 Forget milk and sugar, this tea packs an alcoholic punch

Today he is the creator of New Zealand’s first alcoholic tea and sells a range of drinks.

It took a lot of trial and error, with one trying to taste like fizzy washing up liquid, but less than a year later Walker was selling Alice – Hard brewed tea.

The drinks were made using traditional beer and tea brewing techniques in his north Waikato garage.

It all started in January last year, when Walker started making home brew out of lockdown-induced boredom.

Based in Pōkeno, his home was inside the Auckland Covid-19 border and he was stuck in prolonged lockdowns.

With a corporate job in the auto industry, Walker was still working, but evenings and weekends were decidedly free.

“There was still a lot of work to do, but you couldn’t go out and see friends or do anything else,” he said.

Walker wrote an online college paper on beer making and converted his garage into a brewery.

Then he wondered, what if you put beer and tea together?

Walker steeped, steeped and strained a hot pot of sweet tea before cooling it and adding champagne yeast.

He fermented the tea in large vats inside refrigerators.

“10 days later it did its job and turned the sugar into alcohol. The whole process takes about 2 weeks.

Something that tastes good hot often doesn’t taste good cold, he says. Then the flavors change again once fermented.

“If it doesn’t work, you’ve wasted two weeks,” he said.

At first, Walker gave himself a budget of $10,000 to see if he could make the business work.

Despite slightly overspending — hitting $12,000 due to minimum order quantities — it made it.

Walker made its first online sale in July on the Choose the Facebook pagea group of New Zealand designers wishing to sell their work.

He said it went crazy and broke the page’s record for most sales in one day.

Walker then began selling at farmers’ markets, before Pōkeno and Tuakau Bottle-O stores stocked his beverages.

Two weeks ago and just before the company was a year old, he took the plunge and quit his job at the company to make and sell brewed tea full time.

“It got to a point where I couldn’t do much with the work in progress.”

Owning a business hadn’t been on his radar before, and Walker said it was crazy how far he’d gone.

“[But] It’s been hard, you have to teach people a whole new drink.

It was a concept people had never heard of, so he spent a lot of time explaining what hard tea was.

Walker said some people have associated it with sparkling wine or cider, but it’s naturally low in sugar due to the fermentation process.

He did everything himself – designing the labels, bottling and packaging the final product himself – and only used New Zealand suppliers.

People could buy a 330ml bottle of strawberry vanilla black tea; hibiscus, rosehip and apple herbal tea; rooibos tea with orange peel and lemon; or green tea with lime and marigold – with 5% alcohol.

Wine-sized bottles of Apple Peach Osmanthus Tea and Pineapple Hibiscus Coconut Tea were also available – with an alcohol content of 7 %.

And Walker was just getting started, with the ability to do three times as much in his garage.

Its next goal is to break into the brunch and high tea market, and to be offered in restaurant bars.

THE COMMISSIONERS OF WASHINGTON CO. SHOULD CONSIDER BUILDING OFFER FOR PECAN GLEN