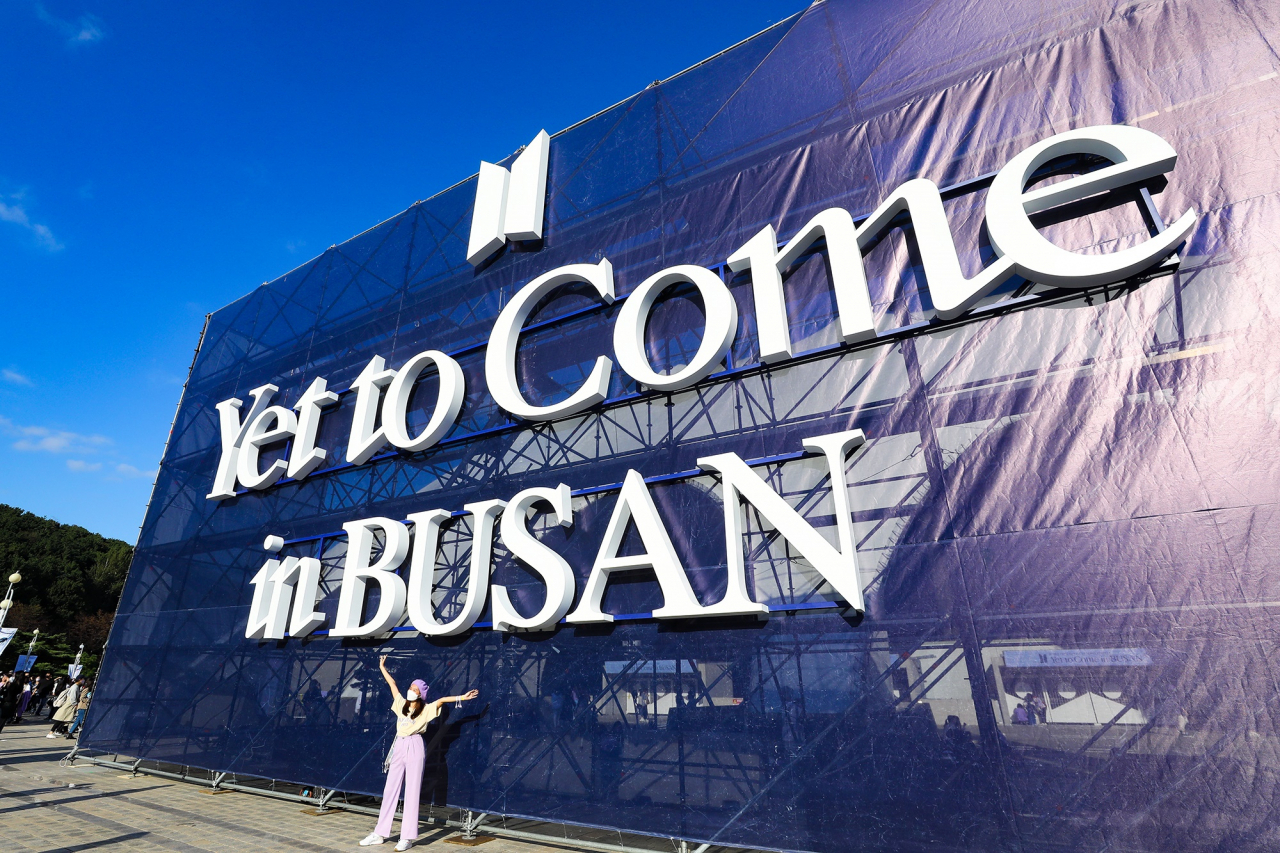 BUSAN – K-pop sensation BTS has covered Busan in a shade of purple. Boy group ARMY fandom from around the world flocked in unison to the country’s second-largest city to feel the festive atmosphere on the day of the septet’s “BTS ‘Yet to Come’ in Busan” concert on Saturday. .

The musical event was planned to support and promote Busan’s bid to host the 2030 World Expo. While it was scheduled to take place at 6 p.m. at Asiad’s main stadium, tens of thousands of spectators and visitors had already gathered in the early morning. They wore hues of purple and were outfitted with other BTS-inspired attire, from clothes to hats, bags, masks, and even dyed hair.

Electronic billboards and banners with the faces of band members lined the area around the venue. Tour buses rented by groups of fans were head to toe. Event booths crowded around the concert hall. Police and the Marine Corps were also stationed to provide assistance.

Among the many foreign visitors was Marisa, 25, who lives in Texas and said she had planned a vacation for the BTS event. Presenting herself as a fan since 2018, she flew to Korea eight days ago. “It’s my first time visiting Busan,” she said, explaining that she couldn’t get a ticket after the booking site crashed. “I came here to enjoy the event.”

Families were also seen together at the scene. A 14-year-old girl, nicknamed Um, came from Seoul early in the morning with her parents to see her favorite band member, Suga, at the concert. A man in his twenties traveled to Busan from Seoul with his fan girlfriend. She was only lucky enough to get one concert ticket, but said of the misfortune of watching solo, “The fans don’t care.”

It was also a special event for the locals. A taxi driver in his 50s said he was surprised that many people from all over the world gathered in the city to see BTS. Meanwhile, he expressed his strong desire that the concert give impetus to the city to host the next World Expo, as it will contribute more to the development of the port city in the future.

“Yet to Come” invited some 100,000 spectators to Asiad’s main stadium in the in-person concert hall and live screening areas near Busan Port Facilities Management Center and Haeundae Beach. The two-hour concert was also streamed live via Weverse and streamed by JTBC.

As dusk faded, Haeundae Beach became another concert hall for BTS fans and residents. Although only 2,000 people were allowed to reserve seats, more people, including local families and elderly people, were able to enjoy the live broadcast via a large screen. The many sounds and lights increased the liveliness and colored the beach purple.

Meanwhile, tech giant Kakao suffered a late afternoon service malfunction due to a data center fire, with services including mobile messaging KakaoTalk and its taxi app Kakao T faced with disruptions, complicating the situation for spectators when they leave. .

As part of a lighting event titled “Borahae Busan”, the city government launched a 15-minute drone show on Gwangalli Beach at 9 p.m. Drones carrying lights were on display highlighting the band members’ faces in purple. “Borahae” or “I purple you” is a term used by BTS and its global fandom in place of “I love you”.

A general introduction to technology mergers and acquisitions in Hungary