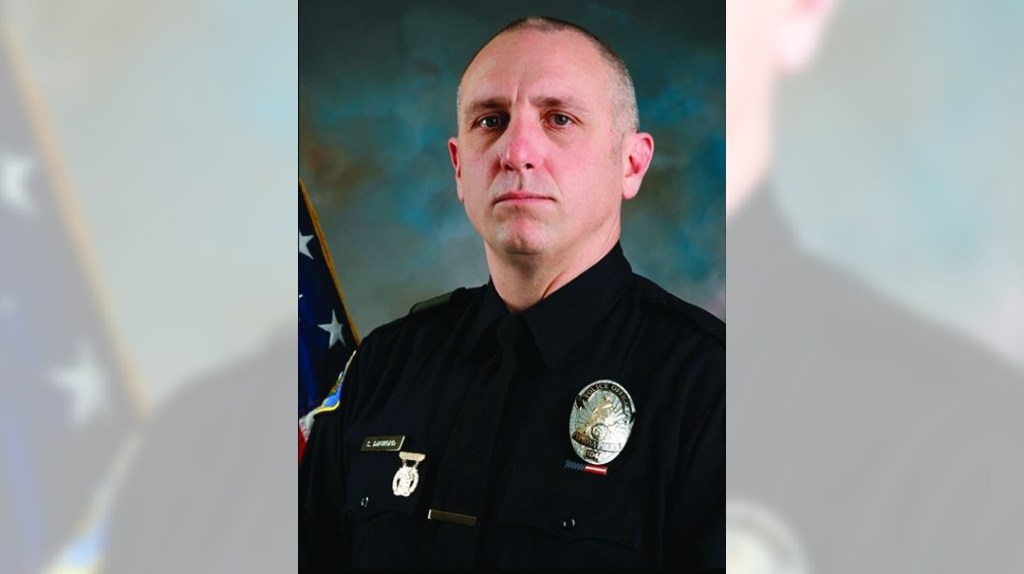 A San Gabriel man who claimed he wanted out of the Mongolian Motorcycle Club and believed it was co-workers who broke into his parents’ house – when he fatally shot an officer – did not leave the group, continued to participate in group events and always spoke or texted with Mongolian members, a prosecutor in court pointed out on Wednesday.

The prosecution sought to undermine the defense’s argument that David Martinez, 44, fired a 12-gauge shotgun in self-defense to protect his family during the 2014 shooting. Martinez testified Tuesday and Wednesday in Los Angeles County Superior Court that he believed it was other Mongolian members on the doorstep and did not know it was members of the Pomona SWAT team on the outside serving a term of search.

One of the officers, Shaun Diamond, was shot in the back of the neck in the early morning hours of October 28, 2014. The officer died the next day at Huntington Hospital in Pasadena.

A multi-agency operation targeting the Mongolian motorcycle club served multiple search warrants on the day Diamond was shot. Pomona SWAT was not part of the task force but was asked to serve the warrant at the home of Martinez’s parents in the 100 block of San Marino Avenue in San Gabriel.

Martinez is on trial for a second time for second-degree murder in Diamond’s death. He was also charged with assaulting a peace officer with a firearm.

His first trial in 2019 ended in a hung jury. The jury acquitted Martinez of first degree murder, but deadlocked on second degree murder.

Assistant District Attorney Jack Garden asked Martinez what he did to leave the Mongols after a motorcycle accident in April 2013. He asked, what did he do in May 2013? Martinez previously testified that the accident was one of the factors that made him think about being with the band.

Martinez said he stopped paying his dues and going to meetings. He told a member he wanted out but didn’t voice it to higher-ups, according to Martinez.

Garden said Martinez could have left the Mongols and the group’s constitution allows for it.

“I don’t remember seeing him there,” Martinez said.

Garden used a projector to show a copy of Mongolia’s smoking cessation constitution.

He also asked Martinez if the tattoo of a Genghis Khan head on his chest was his only Mongolian tattoo. Martinez said yes. However, Garden said the San Gabriel man also has a tattoo of “MFFM” on one arm, which he says stands for “Mongols Forever, Forever Mongols.”

After the lunch break, Martinez was asked to remove his long-sleeved shirt and tie to show the jury the tattoo of “MFFM” on his arm.

“You told the jury that you didn’t have (another) Mongolian tattoo. It’s a lie, right? Garden said.

The judge told the prosecutor it was argumentative.

Two days before the shooting, Martinez said he attended a Mongolian event where he took methamphetamine from the toilet three times. He put meth on a business card, which he put in the small pocket of his Levi’s jeans.

“You chose not to turn it down,” Garden said. “And you took it with you to get high again in the future.”

Police would find the drugs in a small room in the Martinez home, which they called an office.

At the same Mongolian event, Garden said Martinez brought home a stolen handgun and showed it to the jury. Martinez got the gun from another Mongol member.

Martinez said it was left in his trunk.

But Garden said Martinez actually got the gun while following the peloton to an event and reading Martinez’s testimony during his first trial in 2019.

Martinez said he believed the weapon came from another Mongol member who was not wearing a Mongol vest. He said he didn’t know the man’s name.

Garden pointed out that at the first trial, Martinez was asked who he was holding the gun for and Martinez testified, “I’m not going to tell you.”

The prosecution will continue to cross-examine Martinez on Thursday, July 21.

How to buy a new car – Forbes Advisor