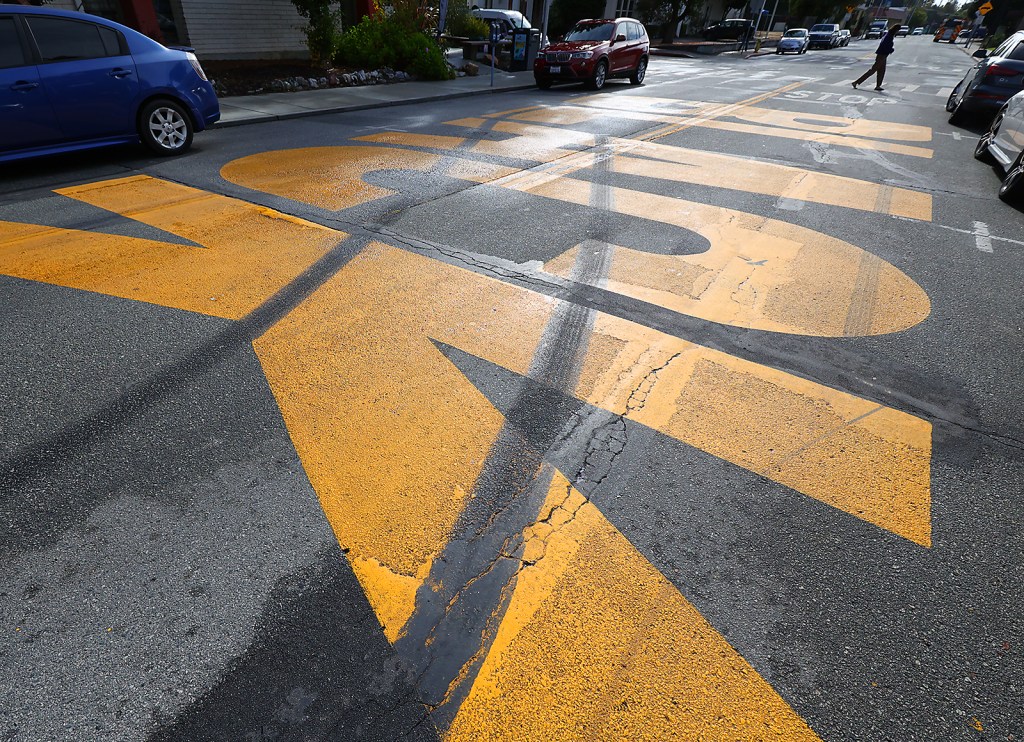 SANTA CRUZ — A judge Monday morning must determine the value of a downtown street painting with the words “Black Lives Matter,” which was defaced a year ago.

Contrary to normal court process, Santa Cruz County Superior Court Judge Syda Cogliati is holding restitution hearings, at the request of defense attorney, before the outcome of the vandalism case and of hate crime. Santa Cruz police officers testified that defendants Brandon Bochat, 21, of Santa Cruz, and Hagan Warner, 20, of Boulder Creek, each admitted after their arrest to marking the painting, although each later pleaded not guilty of the crimes.

Defense attorney Micha Rinkus, representing Bochat, said at the December 15 preliminary hearing that she hoped “to resolve this case without having to go to trial and all that that entails.”

At a restitution hearing on June 2, Cogliati heard testimony about the painting’s value and ordered the prosecution and two defense attorneys to follow up with separate case briefs to discuss the amounts of the painting. proposed restitution in time for Monday’s decision. In his filing, Santa Cruz County Assistant District Attorney Michael Mahan argued that the value of the paint replacement, based on testimony, should be pegged at nearly $89,000, a price including the pressure washing, city permits, paint supplies, artist time and street closures. . At a rate of $30 per square foot for a 2,750 square foot painting, artist fees accounted for the bulk of the estimate – $82,500. That amount was down from an earlier city estimate of about $115,000.

Defense attorney Ed Sidawi, representing Warner, said he argued for restitution to be set solely at the price of permit fees and paint, because “the court cannot award speculative restitution. It can only compensate economic losses. A similar file by Bochat’s name was not immediately available on Friday.

‘More than ‘painting in the street’

The privately funded Black Lives Matter painting was originally created in September 2020 in front of Santa Cruz City Hall as a community volunteer effort, under the supervision and direction of artists locals donating their time. In June 2021, a group of quirky organizers led artist collective Made Fresh Crew’s effort to freshen up the paint, part of a planned annual celebration and community conversation. Just over a month later, two different drivers in a pickup truck with an American flag mounted in its rear bed each drove over the paint, leaving behind dark rubber burn marks, according to the witness’s testimony. a witness to the video surveillance of the town hall.

Lawyers for Bochat and Warner questioned the high cost proposed to repair or replace the paint.

In a letter sent to court through Mahan this month and signed by 44 supporters, the authors write in favor of a higher restitution amount in the case, citing the cultural and historical significance of the work of art. The street painting was approved and authorized by the Santa Cruz City Council “during a pivotal time of national judgment and uprisings over racial justice and police brutality,” according to the letter.

“It was much more than ‘painting in the street’. It was an important work of art for our entire community, and especially for the black community,” the letter from the community reads. “This piece symbolized safety, belonging and community care – other groups have specifically held events at the site of this mural for this reason – and, from that perspective, this mural did not of price.”

Several community members who spoke out on the case pushed the Santa Cruz County District Attorney’s Office to find an outcome that reflected the restorative justice model, which generally aims to restore public trust through direct interaction between victims and perpetrators.

Artist Abi Mustapha, who was inspired to bring the Black Lives Matters effort to Santa Cruz after seeing similar work in Oakland, described the painting as a “punch to very old wounds. She also supported a restorative justice approach.

“As members of our community, they deserve a chance to apologize and make amends just as much as I and others deserve an apology,” Mustapha wrote in court. “We all deserve a chance for reconciliation. This is how I would want to be treated if I were them.

Defense lawyers argued that the vandalism involved their clients’ disregard for Black Lives Matter as a political movement, rather than an act rooted in racism. During the preliminary hearing of the case in December, footage taken from Bochat’s video and the Snapchat social media account allegedly showed Bochat driving Warner’s truck over the board while Warner and several miners shouted “may white” and gave Nazi salutes. Warner was also heard saying “heil Hitler”, according to reports.

Monday’s hearing is scheduled for 9 a.m. in Department 6 of the Santa Cruz Courthouse.