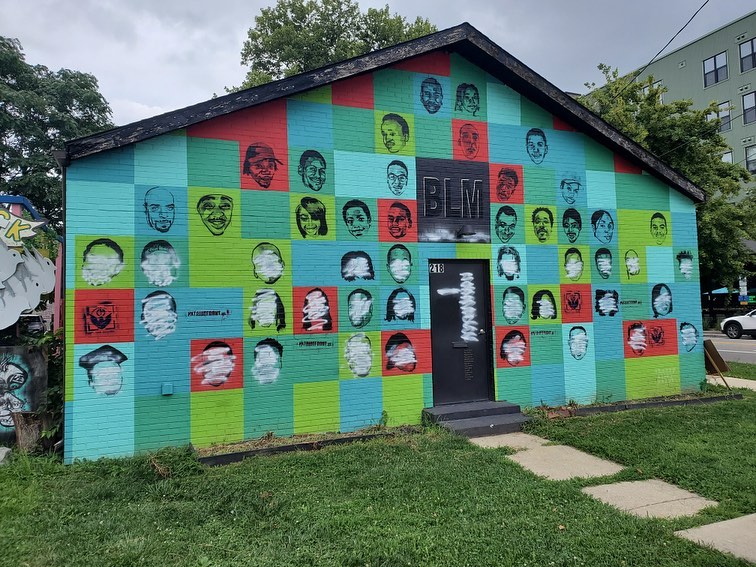 Photos sent to NBC4 showed vandals using white spray paint to cover several faces on Katie Golonka’s “Stolen Joy” mural. The executive director of the Franklinton Arts District said this room in the Vanderelli Room art gallery – designed as a memorial to 45 black and brown Americans killed in incidents with police – was the main target of vandalism.

The painting of the vandals hit 28 different faces on the mural. On Monday morning, solid colored squares covered what the vandals had done.

Artist Golonka created “Stolen Joy” in the summer of 2020, when civil unrest over the death of George Floyd was at its peak, according to the Franklinton Arts District. It was a staple in the Vanderelli room for the next two years, until it was covered in white paint.

Nor was “Stolen Joy” the only artwork in the Vanderelli Room painted over during the vandalism.

A photo from Google Maps showed what the mural looked like before it was vandalized.

The executive director of the Franklinton Arts District has shared a statement regarding the “Stolen Joy” vandalism.

“We are deeply saddened by the most recent vandalism displayed at the Vanderelli Hall…And other artists whose work has been vandalized represent the values ​​of inclusion we uphold in the Franklinton Arts District. We stand together as a community and will not let the hatred of others silence the message that there is an outbreak of racism in our country. The outpouring of support for the Vanderelli Room is a sign that art can have a positive impact on culture.

NBC4 also reached out to the gallery owner for comment, but did not hear back Monday afternoon.